Recently I came upon a dilemma that many parents must face. My mum and her partner were visiting from the UK and keen to take in the sights. My wife and I have two children – both in child seats – so there would be six of us needing to drive around. I had a Golf hatch that I was driving for work at the time, while our family car is a 5-seater Kia Sportage. All of this would mean that we’d need two vehicles to transport us everywhere.

Unlike many New Zealanders, my work puts me in a unique position whereby I can swap vehicles to something that better suits my needs. For that reason I found myself in a new 7-seater Kia Sorento.

What’s interesting is that up until this point I’d always thought of 7-seaters as merely being handy if you needed to pick up your child’s friends from a sports game, but in our scenario – visiting parents/in-laws – a 7-seater was the only way for us to be driving around together. The alternative being them driving my work car while we kept to our Sportage, or them hiring a vehicle which would really rack up the cost of their visit.

For the first part of their trip we visited a few places around Canterbury with us all comfortably in one vehicle. For the second part, the two of them joined my son and I in the Sorento on a road trip around the South Island, with my wife and second child flying down to Queenstown to meet us for that leg for a few days as my youngest is too young to travel long distances in a car.

Throughout the trip I learnt a lot about the new Sorento, particularly from the perspective of a family man with two kids in car seats. I’ll try to share some of that experience here as there’s a reasonable amount that you couldn’t pick up from a test drive alone. The first thing I liked about the Sorento is its looks. A lot of SUVs can look a little awkward, but the Sorento has nice proportions; like it was designed to be this size rather than a stretched-out 5-seater. On that note, the interior space is exceptional. 7-seaters aren’t really designed for adults to sit in the very back row, but you can just about get away with it in the Kia, particularly as the centre row can slide forwards to give rear passengers extra legroom. Crucially for someone like me who is over 6 foot, it was also possible to sit in the back without my head hitting the roof like I’ve experience in other 7-seaters.

One slightly awkward feature is that – of the middle row – only the passenger side’s seat is designed to fold forward to allow access to the rear row (while the driver’s side can fold completely flat, it doesn’t slide forward in the same way for rear access). This is a good thing in that you’re forced to get in and out on the pavement side of the vehicle rather than the driver’s side, but some other 7-seaters do allow access on either side. A key limitation of this is for those who like to put their child’s car seat on the rear left so that – as the driver – they can easily see their child in the rearview mirror. In this case, the child seat has to be directly behind the driver so others can access the rear from the left side. 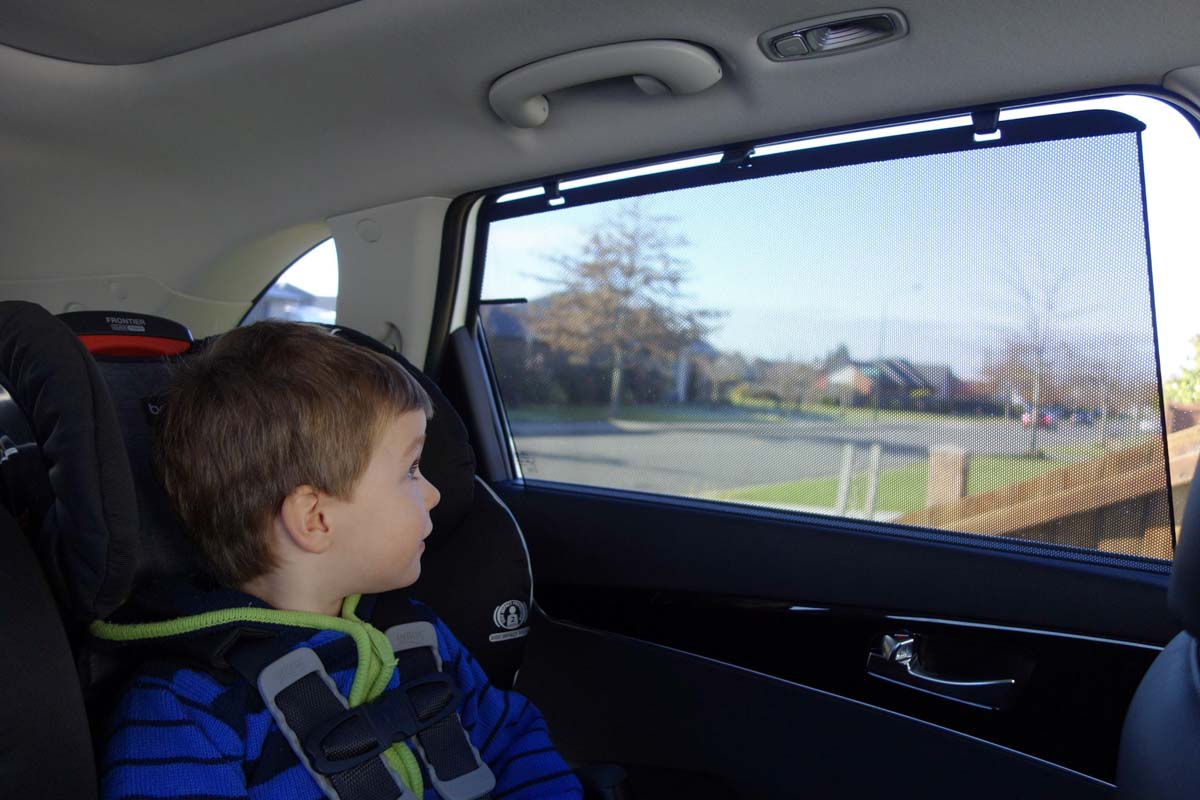 All-round greatest feature: the pull-up rear window blinds! In our own vehicle we have those stick-on blinds on each side. They don’t cover the full window, the kids pull them, can’t really see through them, and we’re always forgetting they’re there when we lower the window meaning that they get damaged. The pull-up blinds in the Sorento are barely noticeable when they’re down and so practical when they’re up. As they clip onto the roof above the window, you can actually have the window fully down but the blind still up, meaning you get fresh air and shade at the same time. The kids can’t get a good hold of them so can’t interfere with them, plus they still get to enjoy the view (and are less likely to get car sick) as they can see through them easily enough. The only other vehicle I’ve seen these in are a $100k+ Lexus LX 570, and there’s no apparent difference in the quality. All family vehicles should have these! The Premium-spec Kia Sorento has an awesome panoramic sunroof. As usual, the sunroof is tinted, electronically operated, and has its own interior shade cover. There is a divider across the centre of the sunroof which breaks the view in half, but overall having a sunroof like this adds a special touch to road trips. We were lucky enough to enter a snow storm on the way into Queenstown, and my son had an awesome experience watching large snow flakes land on the roof of the vehicle, not to mention the heavy rain that we had later on and then star gazing at night. Having the shade all the way back increased the natural light levels inside the car and gave us the impression that the interior space was much bigger than you would usually expect. From the outside, the sunroof isn’t easy to see, and instead you’re treated to a large glossy black roof which contrasts nicely with the bodywork, especially on our white vehicle with black trim. 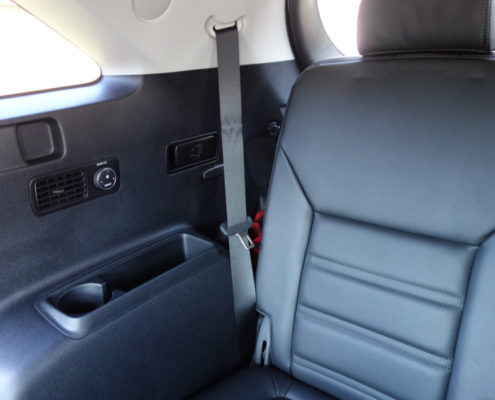 If you’re looking for a 7-seater SUV, you have a fair few options on the market these days. From this Kia Sorento to the Nissan X-Trail and Pathfinder, Toyota Highlander and Fortuner, Ford Everest, Mazda CX-8, Lexus RX L, Volkswagen Tiguan Allspace, ŠKODA Kodiaq, and more.

One thing to ask here is:

In some cases, people buy a 7-seater without necessarily needing the 3rd row as it’s larger than a 5-seater when the seats are down, giving you more luggage capacity, plus having the option of 7 seats when you need them can come in pretty handy. Something that people may not think about when it comes to seating children is that the 3rd row generally doesn’t have ISOFIX and often doesn’t have an anchor point on the rear for a top tether. On a similar note, the very rear may also not have curtain air bags. If you put child car seats on the 2rd row, you’ll need to be conscious of how you’re going to access the 3rd row if you have child seats in the way.

I’ve had a poke around a few 7-seaters, and the most impressive rear row access I’ve seen so far is actually with the Nissan Pathfinder. The 2nd row seats don’t just lean and slide forwards, the actual base of the seat lifts up so that the seat can slide even further forward, giving easy access to the rear. Passengers in the rear can also let themselves out as they have easy access to the seat release lever; something that you don’t necessarily consider until you’re sitting in the 3rd row and need to get out!

When it comes to comparing the Kia Sorento 7-seater, I’ve chosen its closest cousin, the Hyundai Santa Fe. Similar to Volkswagen and ŠKODA, Hyundai and Kia are actually both part of the same group; the Hyundai Motor Group. You see a reasonable amount of DNA shared between the two.

The Kia Sorento saw a new series launch in 2015/2016, followed by a facelift in early 2018 (which introduced the 8-speed automatic transmission). Meanwhile, the Hyundai Santa Fe has just seen an ‘all-new’ series launched, so it’ll be interesting to compare the two.

I was a little surprised to see that Hyundai aren’t really advertising the price of their Hyundai Santa Fe online. It’s not obvious at all on their website until you use their finance calculator which shows the model’s price within its calculations. If those prices are correct, the Hyundai starts at $59,990 for the petrol model and $66,990 for the diesel. Meanwhile the Sorento starts at $51,990 for petrol and $55,990 for diesel, so a surprising amount less.

I haven’t driven the Santa Fe so the below comparison is based on the spec sheet alone. I’ve listed specs for the entry level diesel in both cases. Note the model I drove around the country was the Premium variant.

When comparing the entry-level diesel models, as expected with an $11,000 price difference and the more recent overhaul, the 2018 Santa Fe offers extra safety features and some nice touches like Advanced Smart Cruise Control (radar cruise) which my Premium model did have but not the entry level model. It’s disappointing to see the newer Santa Fe has lower fuel efficiency and higher carbon emissions despite the slightly lighter weight, however. Also note the difference in power delivery, with the Sorento providing its peak power output at lower revs than the Santa Fe, which might suggest that the Sorento can deliver its power more obviously when needing to overtake vehicles, etc. The Sorento also benefits from another 40 or so litres of luggage capacity.

Kia is performing exceptionally well right now. The J. D. Power Dependability Study even placed Kia in the number one spot for dependability – around 5 places higher than Toyota. Ever since they took on a new designer, the cars are looking sharp and I particularly like the black interiors with controls lit up in a subtle red glow.

The Kia Sorento itself should be high on your list if you’re looking for a 7-seater vehicle, with ample space in the rear row and easy access, unlike some other 7-seaters. It’s got plenty of power for easy overtaking, while not sucking up too much fuel. The handling is also worth of note. Its turning circle is amazing. The spec sheet lists it as 5.7m; I don’t know how the figure itself compares against competitors but on the road we were constantly surprised at how easily we could turn the vehicle around in small spaces.

Kia’s 5 year warranty as standard is also pretty close to the longest you’ll find, plus the AA Roadservice membership (for the same duration) adds a reassuring touch. Add the Kia Roadside app to your phone and you’ll have quick access to callouts when needed.

The Kia Sorento is available in Christchurch from Cockram Kia.

Create Your First Website in 5 Easy Steps
Scroll to top